Do You Need Your Auto Air Conditioning Fixed?

Residents of Phoenix Arizona know fully well that a properly functioning car air conditioning system can spell the big difference between having a pleasant and comfortable drive to your destination, and a gruelling ride to wherever you want to go.

Thankfully, people in Phoenix have a go-to shop for all their car AC needs – Mike’s Tech Transmission, which is easily accessible wherever you may be in the city. At Mike’s, we will restore your AC to its brand-new shape, saving you a lot of sweat and stress from driving under the sweltering heat of the Arizona sun.

The car AC was invented by Packard in 1939. It was the first car manufacturer to provide automobiles with factory-installed ACs in 1940. While the first AC system was not equipped with a thermostat, it was a lot more convenient than having no AC at all. The concept spread like wildfire, and by the year 1969, majority of the new cars sold came with built-in air conditioning systems. Add the aftermarket aircon units, especially for cars bought by owners who wanted to save a few bucks by making do without AC, and you get an idea of how popular car airconditioning had become.

The refrigerant that had been used in automotive AC for several decades, CFC-12, R-12, or Freon (the popular brand name), was later discovered to be wreaking havoc on the ozone layer because of the substance being a chlorofluorocarbon. It was subsequently banned for manufacturing use in the US. The alternative, HFC-134a or R134a was required to be used by all car manufacturers beginning in 1996. Older cars had to be retrofitted with the modern system that utilizes the safer, newer refrigerant.

How the AC System Works

The car AC has worked practically the same way since it was invented – it cools as it removes the humidity from the air in the car. Basically, it has three main components: the compressor, evaporator, and condenser that help the system achieve its function. There are other minor parts that maintain the smooth operation of the AC.

A lot of car owners are not aware of how exactly the car AC works. At Mike’s Tech Transmission, we don’t only fix your car air conditioning, we will also gladly explain what the issues are, and how to avoid them in the future. Having been in the business for a long time, we understand that constantly fixing a problem that you do not fully understand can be quite frustrating. Thus, we guarantee that your AC problems will be fixed the first time you bring it to our attention. 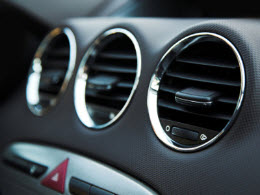 If your car AC is no longer running at its best, the culprit may be low refrigerant pressure. This can be easy to fix, depending on the situation. The solution may be to simply top off your system (recharge aircon refrigerant). If there are signs of a leak, you can check the condenser, compressor, hoses and fittings on your own for any type of oily or grimy build up. There may be a refrigerant leak if you find excessive build-up. Some refrigerants include an ultraviolet dye that provides the fluid a greenish color. This makes the leak easier to spot.

A failing compressor is another common problem to watch out for. The compressor can breakdown and shed pieces that will then run through the hoses, condenser, evaporator, and accumulator. These will then lead to a build-up of refrigerant and broken pieces of parts. If these are not flushed out, your compressor can be severely damaged in no time. Thus, if you notice strange ticking or knocking noises from your compressor, or if it generates a squealing sound after it is turned on, immediately take your car to Mike’s Tech Transmission. We will bring your car aircon in top shape again.

If your AC merely needs a Freon refill, there is nothing to worry about. We can address the problem quickly, whether the lifeblood of your AC is the older R12 Freon or the newer ecologically safer R134A system, we have you covered.

Visit us at Mike’s Tech Transmission in Phoenix, AZ. We guarantee to help make your driving cool and comfortable by efficiently solving your AC problem – the first time.